The book named “50 Questions on AI” of Prof Cem Say from Bogazici University, the Department of Computer Science Engineering, is published this month. The book has a rich content and many people of various areas show interest to it.

While Say asks questions on several usages on computers, he uses a language that embraces readers by including his memories. By the narrative telling, he succeeds to keep at a level that the readers of all interests can understand technical information.

First I, as a lawyer, read impatiently the part of “Can computers be lawyers?“. He says that these systems are more successful than lawyers in terms of documentation, case law search and decision making, and I think he is pretty right. Many tiresome tasks that take hours of the lawyers, can be facilitated by these systems.

The last question reminds our limits: “Does the human intelligence have a future?”  While he mentions that “these additional brains” can be useful to us, drawing a positive frame, he underlines that abuse by oppressive governments can curb humanity.

In addition to the above, the book has questions related to many current and social topics as. “Can robots fall in love?“, “Can computers make an invention?” or “Can robots be enlisted to military?” etc.

Reading this book is very delighting and fluent… I do not want to give away more details, but the last sentence of the book is very promising: “We can succeed!”

A small wish: I hope it will be translated into English. 🙂

The Singularity Is Near When Humans Transcend Biology

Ray Kurzweil is one of the foremost futuristics in the world. Forbes qualifies him as “the biggest thinking machine”. In his book “Singularity is near” originally published in 2005, he emphasizes how the improving technology affects humans’ biological structure.

In his book, it is mentioned that the speed of technological change is transforming human life, and the effects of change will get deeper. This period that is named as  singularity by Kurzweil, will completely change the concepts we rely on to make our lives meaningful.

According to Kurzweil, evolution creates a skill, then it uses this skill for developing the next step. No doubt, beginning using this technology in all areas of life, will affect also human evolution. One day technology will dominate every point of biology, including human intelligence.

I advise you to read this book which reveals the destructive effects of technology from past to now and the developments that will transform us in every way in the future, and which shows a futuristics perspective. 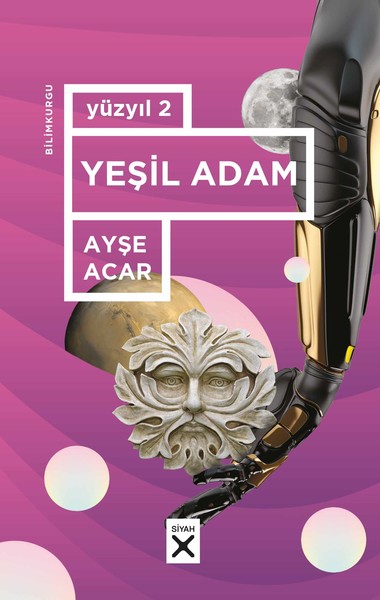 Century Novels is science fiction series that reach from past to future. In this novel, the universe is segregated into three districts. In the first district, there are “artificial intelligence”s, “humac”s, and “chosen human”s, in the second district, the robots realize various productions and in the third one, there lives humans who are against the alterations on human body and acknowledge that the human body is as sacred as the human spirit.

In the first book of the trilogy, “Mr. Binet”, the story begins with some operations regarding some killings and abductions of humans, in the second book “Green Man”, it continues with some raised voices for the change of the Universal Law  and the disruption of the peace atmosphere that lasted for years. And the strikes of robots escalate the events further more.

With the inclusion of Istanbul and Afghanistan into the adventure, Ayse Acar, brings us into a story,  that we can read at a breeze.

A book, that I think you will enjoy reading, on science fiction in Turkey!

The Future Computed: Artificial Intelligence and its role in society

Developments in technology over the past 10 years have made us smarter and more productive and change the way we communicate, learn, shop, and even play. And that’s just a start. The development of artificial intelligence (AI) creates systems that ensure new opportunities to improve education and health care, combat poverty and provide a more sustainable future.

Microsoft believes that six principles should provide the foundation for the development and deployment of AI-powered solutions that will put humans at the center: fairness, reliability, privacy and security, inclusiveness, transparency, accountability.

Microsoft thinks optimistic about the opportunities that AI provides to create a better future for all. In order that we realize this future, it will be essential for governments, businesses, academics and civil society towork together in creating trustworthy AI systems.

I would recommend that anyone who is interested in this issue read about this book, which includes the predictions of the technology pioneer about the future of artificial intelligence.

Pedro Domingos is a computer professor at Washington University.  He is considered worthy for SIGKDD Innovation Award which is most prestigious award on data science, besides he is a membership of Association for the Advancement of Artificial Intelligence.

According to Pedro, if Artificial Learning had been a something bought from supermarket, it would have been written “just enough to add data” on its box. He explains technical informations about artificial learning in a way that everyone can understand at The Master Algorithm book. He gets us to feel how effective this technology actually is in our lives, with the examples he gives. In this regard, it can be a great book for someone who interests on this field but exaggerates it. There is also Turkish translation of the book, but I recommend reading in the original translation.

Ayşe Acar is a author who researchs in the field of theology, philosophy and history. She has a great number of documentary and archive studies on belief groups. At the first view, you may think these are diffirent specialties for a science fiction author. But, “Bay Binet” tells the opposite.

What would have happened, if we had lived with AI and robots some day? No doubt, we can find a good many science fiction books on this question. But, this book has signs from the present world and beliefs. Thanks to this, it makes feel that living with robots is not a far future. For example, one of the characters thinks living with robots makes people query belief of God and ahret.

You can find Afghanistan and Istanbul, besides this book has topics about radical religious groups, a taliban militia.It is interesting, is not it? I think it has a great science fiction plot. You should absolutely read.

The Laws of Robots; Crimes, Contracts, and Torts

Since 2000, Ugo Pagallo works at Turin University. Author has numerous articles, but his main field of interest are robotic, information of technology, AI and law. He is currently a member of the Ethical Committee of the CAPER project, supported by the European Commission through the Seventh Framework Programme for Research and Technological Development.

“The Laws of Robots” which he published in 2013, sheds a light on the contentious subjects about this field. He investigates position of law in relation to technology and philosophy. He comments on problems to be faced in the event of torts or crimes.

It’ s a book, which must be read, on robot law especially about contracts and liability. But a bit expensive 🙂

Though he published many studies, he is known by his contribution to trans-humanism. In 2003, he attracted the attention by his “Simulation Argument”.

Though he published many studies, he is known by his contributions to trans-humanism. In 2003, he attracted attention by his “Simulation Argument”.

In an interview, Bostrom said that : “We are like small children playing with a bomb”. He can be right about this subject. As, if the artificial intelligence begins to query its own creation and intended use, it’s wrong decisions can easily make it go haywire.

Unfortunately, Turkish resources about robotic and law are very limited in Turkey. Recently publish this book, has a lot of general information regarding the subject. You can find conceptual discussions, EU reports, robot’s legal status and other various information.

In the preface, there is a good note from the author. “Maybe it is not possible to forecast which of our predictions will be realized for the future, but we cannot deny that the technology changes our lives in unpredictable way. Maybe, in twenty years from today, most likely we will be talking about some problems’ solutions that today we are not even aware of .”

However, due to his general overview of the topic, the content scratches the surface.. But it has a great bibliography for the interested people who can find many starting points.

I advise it for the ones in search of a Turkish resource.

American author born in Russia Isaac Asimov, especially is famous by science fiction writings. He has a lot of literary works, translated to Turkish and when the topic is robots, he is one of the first names that pops in anyone’s mind. If you search on the subject, I can say that, almost in every work you see the references to the famous three laws of robotics of his. Asimov also added a fourth, or a zeroth law, to precede the others. These laws are:

Actually, there are so many things to say about Asimov, the perspective he brought to our attention regarding to robots, shows what a great author he is. “I, Robot”, published in English and translated to Turkish as “Ben, Robot”, contains fluent, fascinating science fiction tales. This work can change your perspective about the relationship between the humans and the robots.

I advise this book to everyone, interested in robotics.